On Sunday morning after the Aroostook County Brewfest I checked out of my hotel and headed up to Buck Farms in Mapleton, Maine to tour the Maine Malt House. They were hosting a “kegs and eggs” breakfast at the farm and it was a good opportunity to check out their operation and see grain being malted.

Buck Farms is family owned and operated, when I arrived I thought I was late but it turns I was the first guest out, the 20+ people ahead of me were all family. This year Buck Farms planted 350 acres of potato’s, 8 varieties that will be seed potatoes sold up and down the east coast, 750 acres of grains including canola, oats and New Dale 2-row barley. The potatoes are harvested and stored down the road, the canola is harvested and shipped out, oats are run through the same grain cleaning equipment they use for barley and sold as horse feed, and the 2 row barley gets cleaned, malted, kilned and bagged for shipment to breweries around Maine. 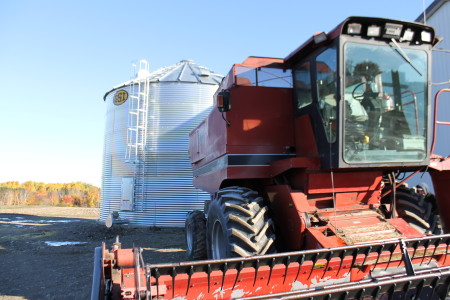 Harvester and grain silo outside the Maine Malt House

The building the Maine Malt House resides in was at one time potato storage, now it’s a fully functional Malthouse with grain cleaning,malting and drying equipment. All of the equipment they are using was purchased second hand and then designed and fabricated on site, by the Buck family to meet their needs.

Harvested grain is loaded into the hopper of the grain cleaner, a grain elevator moves the kernels up to the de-bearder which removes the barley awns the long hairlike appendage extending from the barley kernel. The kernels then move to the screening system, 3 screens clean and sort kernels kicking off anything larger or smaller than 6/64th of an inch, during this process an inline air system removes all dust from the process. Kernels that meet specifications are then dropped into awaiting super sacks and stored for the malting process, anything that doesn’t meet spec is used as animal feed or fuel for their biomass boiler. 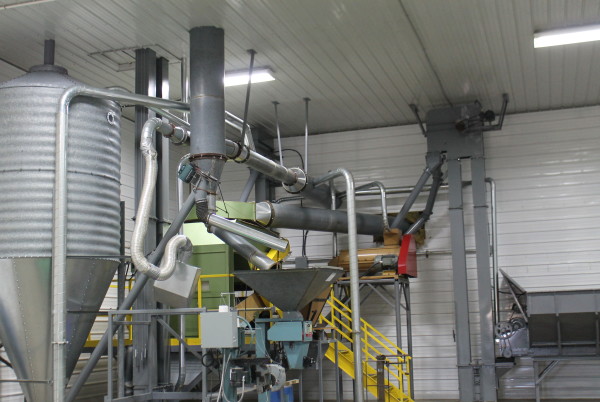 The Malting process is essentially a controlled germination 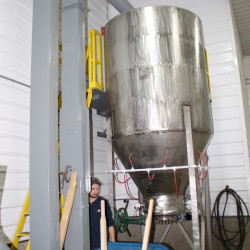 Grain is soaked before being moved to the floor.

in which the grains begin to sprout and are stopped by removing the moisture content. This is done by loading cleaned kernels into a tank and immersing them in water, the Maine Malt House uses a fermentation vessel that has been converted to meet their needs. 4400 pounds of grains go into the tank and it filled with water, these grains will rotate between being soaked and dry rest phases for about 38 hours. Once the cycles are complete and the grains have absorbed enough moisture they remove the wet grain (26 wheelbarrow loads) and spread it evenly on the malting floor. The grains will be raked every 8 hours until they reach a temperature of 90 degrees and then raking happens every four hours. Grain spends about 4 days on the floor being turned and raked. To determine when the grains are ready, 50 sample kernels are pulled and the acrospires (developing plant embryo) that are growing under the husk  are checked, once it has grown the length of the kernel it’s time to kiln dry the grain. 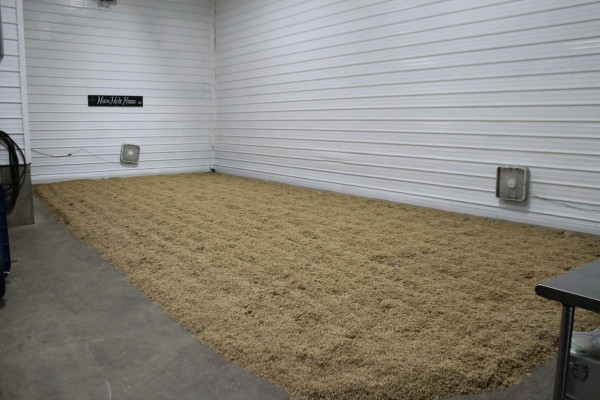 Maine Malt House uses a Nyle system to kiln their grains but the kiln box is custom made by them, a large removable (with forklift) tray is brought to the malt floor to be filled with grain then placed back in the kiln. The grain spends 24 hours in the kiln and is processed in 5 cycles that wick away moisture and stop the malting process. Grain in the field has about 12-14% moisture content, on the malt floor after it has been soaked it’s around 44% and the kilning process drops that down to around 4% so it can be stored. 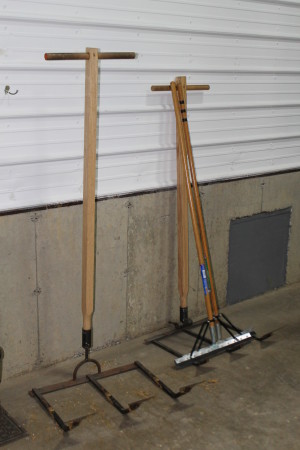 Jacob Buck pulled some kilned grains out so I could taste them, “just like grapenuts” was his description and he was right, they have a nice crunch, nutty flavor and a burst of sweetness. Brewers take these grains and steep them in hot water to convert starches into sugar, this is called Saccharification, the grains aren’t actually sweet, the burst of sweetness I found is caused by enzymes in saliva, called Amylase, that convert starches into sugar the same way as steeping but it would take way longer for brewers to chew up all that grain. 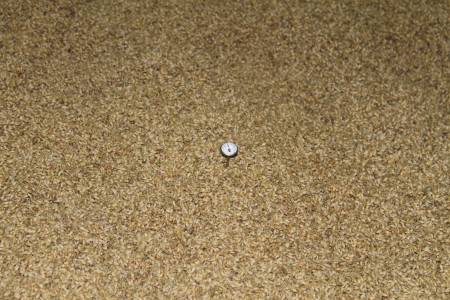 After the kilning process the grains are run back through the grain cleaner to remove all the rootlets from the malting process, dropped into 50lb bags, sewn up and ready to ship out to brewers. Maine Malt House gets around 2 tons of grain per batch. With two silos full of unprocessed barley they’ll be busy all winter cleaning, malting, kilning and bagging 2 row base malt. 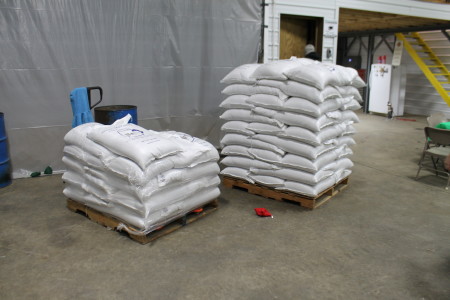 The Maine Malt House is a pretty impressive operation, these guys were selling their barley to malting companies out of state, they knew they had a great product and they figured out what made it great and how to process it themselves. With an ever increasing demand on malted barley they were able to keep a homegrown product close to home and in turn closer to Maine brewers. It was kind of a wild, beer geek moment to be standing on the malting floor drinking a Geaghan Brothers Hop Harvest that was brewed with grains that had been harvested just outside and malted right where I stood. 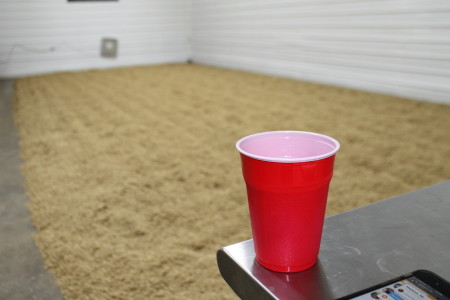 People like to know where their food and drink are coming from, it’s easy to go visit a brewery these days and see the process but then there’s the ingredients, Maine Malt House makes things that much more transparent for places like Square Tail Brewing who use their base malt exclusively, you know that when you take a sip the barley in that beer was grown in Maine soil, harvest, cleaned, malted and kilned, delivered, brewed and ultimately poured by Maine people, ground to glass for real. Maine Malt House currently only does 2-row barley but they have their eye on specialty grains as well, I look forward to seeing more Maine beer brewed with Maine grains.