The Bangor Symphony Orchestra was founded in 1896 and is one of the oldest continually operating orchestras in the United States. The BSO’s 120th birthday is fast approaching and to celebrate they have teamed up with Geaghan Brothers Brewing to brew up a special release beer. 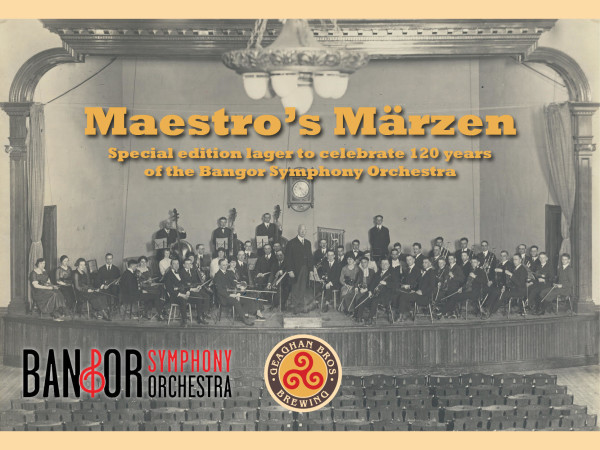 Maestro’s Märzen will be released on Saturday, November 21st at 7:30pm at the Geaghan Brothers Brewery on Abbott Street in Brewer. Märzen is a old world, German style lager that will pair up perfectly with BSO’s November 22nd concert that features music from Haydn, Schubert and Beethoven. Andrew Geaghan, Head Brewer at Geaghan Brothers Brewing describes the beer as “a slightly copper German style lager with slight caramel and crystal malt highlights and a full bodied, yet dry mouth feel.” This Märzen is only the second Lager GBB has brewed and since there are so few lagers being brewed in Maine it’s worth checking out, the release party on November 21st at the Brewery is a ticketed event, tickets are $10 per person and include one pour of Maestro’s Märzen and a special performance by BSO Guest Violinist Elena Urioste. A portion of all ticket sales and purchased pours at the event will benefit the BSO.

BSO’s concert Beethoven & Friends will be held at the Collins Center for the Arts on Sunday November 22nd, tickets are available for purchase. This concert will be lead by Lucas Richman, Music Director and Conductor for the Bangor Symphony Orchestra with Guest Violinist Elena Urioste joining for the Beethoven’s Violin Concerto. Brian Hinrichs tells me “Elena is an incredible young player, whose career is really taking off right now, with performances across the UK and US this season. Audiences will not want to miss the chance to hear her with the BSO.”

If you can’t make it to the tasting room on November, 21st, Maestro’s Märzen will  continue to be available at the tasting room and Geaghan’s Pub in Bangor after the event, other restaurants will carry the beer, those establishments will be announced later in November.