In November of 2014 I wrote about Square Tail Brewing for the first time, I drove out to meet Wes Ellington and tour a half assembled brewery and learn what he was all about. In February of 2015 I was back out in Amherst to check out the finished brewery and tasting room just before he opened. At the very tail end of November 2015 I sat down with Wes again, just over a year from the first time we met, this time it was to discuss his departure from Square Tail Brewing.

Wes built Square Tail with his parents, Gary and Sharon Cresswell, he has continued to work a full time job on top of his duties at the brewery, his wife also worked the tasting room. I had initially assumed that when the announcement that Square Tail was looking for a new Head Brewer they were looking for a second head to help with the workload, as it turns out Wes made the decision to resign as head brewer to spend more time with his family.

Working a full time time job, being head brewer and having his wife working the tasting room made it difficult to find time to spend together with their son, at the same time his business partners were looking at taking the brewery in a different direction that wasn’t part of his initial vision of the brewery and Wes decided to step away.

The split, though difficult, was a clean one, Wes resigned and will sell his shares of the brewery, “we both realized we were going in two different directions and something had to give, I’ve got a young family I’d like to spend more time with so I’ll give.” I also think it’s important to note that Wes doesn’t project any hostility towards his parents and one time business partners, as he puts it “They’re still my parents, I still love them.” 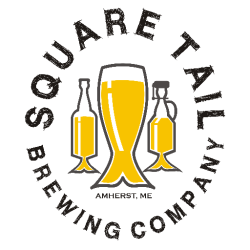 I also took the time to sit down with Gary and Sharon Cresswell and their new Head Brewer Ray Edgar to hear how their new partnership came about and where they plan to take the brewery in the future.
Gary and Sharon announced they were looking for a new Head Brewer on Facebook and reached out to other breweries in the Greater Bangor Area for recommendations. The local breweries were incredibly supportive and pointed them towards Ray Edgar, who had heard Square Tail was looking and reached out to them. They also fielded responses from all across the country, in the end though with recommendations from local brewers they ultimately decided that Ray was the right fit for their brewery.
As for the direction of Square Tail Brewing, Gary and Sharon have spent time travelling and are heavily influenced by the small town pubs in the UK and want their tasting room to embrace those traditional pub ideals. They talked about a tree lighting event they hosted at the brewery recently “we lit a Christmas birch tree and had a bonfire with carols and of course Santa put in a quick visit for all the children” Gary told me, and Sharon added “we sold more hot cocoa than beer” and they were happy about it, because the community came out in force.  Square Tail will start the transition in the Spring with the conversion of the old furniture mill.
There will be more changes at the Amherst facility and the business model as Ray establishes his beers and the pub area gets built out.  But brewing will remain the first and foremost priority, their goal is to produce the highest quality product, which brings in members of the local community and of course the beer community.  The goal of the expansion is to to have a classic British pub feel, to be a hub of social activity, a place to stop  in to have a great beer and catch the goings on around town, tell stories and socialize. They plan on offering food, a limited menu that compliments the beer but do not call them a Brewpub, they are not that. Sharon described it as a “place where you belong” adding “it feels cozy and warm, you just walk in and know you belong, and then the beer is the primary thing, the beer is absolutely exceptional, that’s the model of it, nothing over the edge, nothing outlandish, nothing overrated, just warm.”

While a change in Head Brewer is more than a mild hiccup in the day to day routine, I think Square Tail has made their transition relatively smoothly, Ray Edgar has already brewed his first batches of beer and for those interested they will be hitting tap lines at Square Tail on December 26th so head on out and meet the brewer and sample his beers.

I also sat down with Ray to learn about his background and goals, check that interview out in a couple days.